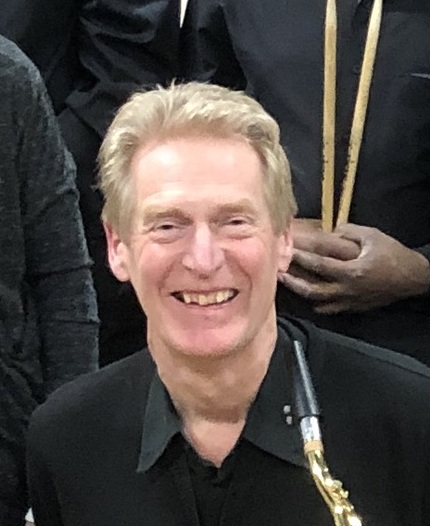 Dave started learning the alto saxophone when he was 17 because he wanted to play the solo from ‘Shine on you Crazy Diamond’ by Pink Floyd. He started playing in music groups at university, including big bands. Liking the music, he carried on playing in several Bristol bands in his twenties, including a big band and modern jazz and funk bands. Now the kids are getting older he has returned to playing jazz. He ran the Chase Jazz Band for four years, during which time their gig count went from 2 to 9 per year, and he is very proud of the standard they achieved. He also plays in a saxophone quartet, for which he has started arranging music – it is only 4 instruments, how hard can it be? Dave is a comparatively recent arrival in the Malvern Big Band, having met Mike and the other members of the band through collaboration projects with the Chase Jazz Band, partly because they discovered a shared love of big band music and Steely Dan, and partly because Dave finally shelled out and bought a tenor sax. One day he hopes to crack playing that Pink Floyd solo, and having realised it starts on the baritone and ends on the tenor, he now stands half a chance.